I know I haven’t posted in a while; I don’t think there’s any need for apology, is there? Things have been pretty busy around here; work has been crazy busy, leaving very little energy for much of anything.  So many things have fallen by the wayside in the past few months – knitting, baking, Postcrossing, blogging – all have suffered.

And then there was the quick trip down to the coast.

My eldest daughter has been wanting to move here for a long time and she’s finally pulled the plug. Last month, she quit her job with the city, packed up her apartment, and moved. You know how sometimes, when you make a life-changing decision, you start to second guess yourself? Well, in this case, with every step she took, things fell into place.

We checked out an apartment for her, one she found online, approved it and it was a done deal. She had volunteer help from a youth group from a church in another town; they helped pack up the truck and helped with cleaning the apartment once it was empty. At this end, a pastor from a local church left a message on her cell phone, offering the services of some of the members of his church to help empty the truck. The truck was filled within two hours and unpacked in less than an hour and a half! To say we were all blown away would be an understatement.

Every part of this move has gone incredibly smoothly and she and the kids are happy to be here, in the beautiful Okanagan. For now, K is on medical leave (for her back issues..lower central spinal stenosis), giving her time to spend with her son and time to settle in and look for work in a more relaxed frame of mind.

The important things had to be unpacked first – the bikes! Those, incidentally, are staying here at Grandma’s house as we have that nice big yard they can ride around in. Before they could ride, though, Ethan’s bike needed some repairs and the seats on both needed adjusting. Grandpa John came to the rescue and the kids were off and riding!

It is so much fun having them around. John’s never been a father but he sure does make a terrific grandfather. Even his first aid experience has been put to the test; already there have been falls and scrapes that have needed just the kind of TLC that he could give. He’s pretty good at this grandparenting thing. I think, given the chance, he would spoil them even more than I would! 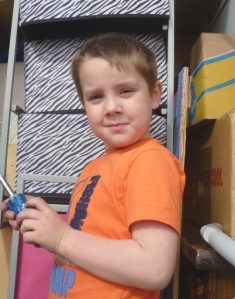 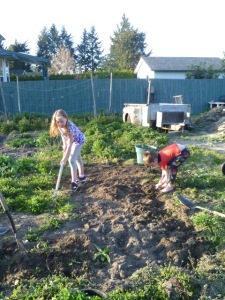 As soon as they saw S out in the garden, they wanted to help; she gave them each a tool of some kind and they got down and dirty. When it was time for dinner, all I got was, “Just a little more? Pleeeeeeeeeeeease?”

And last night, for the very first time, my granddaughter spent the night at Grandma’s house… without Mom. We had a lovely time with her, watching a movie, snacking on apple slices and popcorn (and the caramel sauce that John decided went very well with the popcorn but I would never give a child just before bedtime!). I’m not sure who’s enjoying her stay more.

Soon, life will settle into a new routine, one that involves more than just the two of us. We are the richer for it!