I Hate When That Happens

First…. hi! I know, it’s been almost forever since I posted. I’m still around, just very busy. Between work, grandchildren, home and summer, there hasn’t been a whole lot of time for me. That seems to be changing a bit now that winter is just around the corner. With the cooler weather and earlier evenings, knitting just seems to be the right thing to do.

I have almost finished a pair of socks for John. They’re looking really good, if I do say so myself. I try to make at least one pair of socks per year for him and this pair has taken a while to make. I’m finally down to the finish line on them. 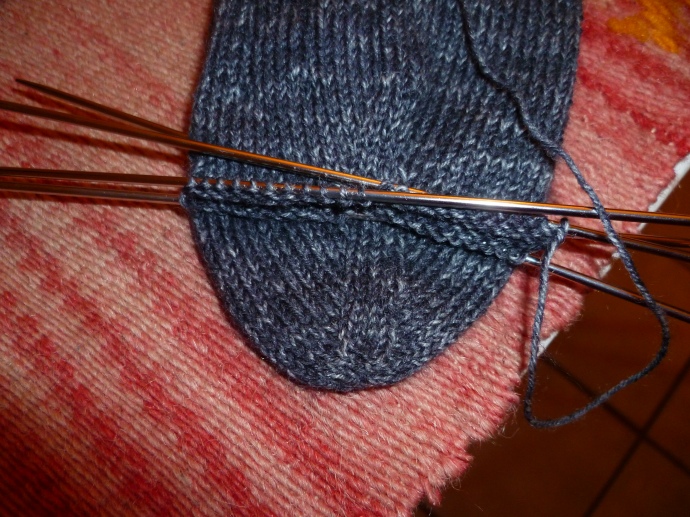 That’s it, that’s all that’s left to knit… about an inch left on the toe.

So, anyway… a few days ago, John asked me if it was possible to knit socks from the toe up. Right out of the blue, he asks this? I want to know why that thought even crossed his mind, why he would even think about it? He said something along the lines of.. “Well, if you knit them from the top down and you run out of yarn, you’re screwed, right?” The man’s a thinker, apparently.

Then he continued, “But if you could knit them from the toe up, you could make the leg part shorter if it looked like you might run out of yarn.”

He’s right, of course. I could knit from the toe up but then I’d have to learn a new pattern. I have this one memorized. And I know that one 100 gram ball of sock yarn is enough to make one pair of socks for him with very little left over.

That bit of yarn? The one with the end showing? That’s it. That’s the last of the ball. That little bit will not stretch far enough to knit that last one inch of sock with enough left over for the kitchener stitch at the toe.

The yarn, Online Supersocke 100 in the Vintage Color is 100 grams of yarn. The first sock weighs 48 grams. That should leave me with 52 grams of yarn which should have been enough to finish sock #2. I am not impressed.

Maybe John’s right and I should try knitting from the toe up.