Before I even start this post, let me make it clear that I rarely eat dessert. I love making yummy things but, after one piece, I rarely have any more. Seriously. You know that apple pie and the lemon meringue pie I made for Thanksgiving? One piece of each. All those cookies? Maybe 4 of each….total.

I love baking. I just don’t eat much of it.

A couple of weeks ago (Thanksgiving weekend, to be precise), in order to make the Lemon Meringue Pie, I bought a bunch of lemons including a bag of Meyer lemons. I still had quite a few left. Then, this week, John came  home with apples. Not just a bag of apples, but four boxes! I was told I could make as many pies as I wanted.

Today, I decided I didn’t want to bake pies so I went on the hunt for apple cake recipes and found a recipe for a French Apple Cake. It looked simple enough. It’s basically apples held together with a bit of batter.

With some whipped cream, this cake is amazing! It isn’t super sweet, even with the icing sugar dusted on it. As I said, it’s more apple than batter. It’s also flavoured with rum, not so much that it’s boozy but just a flavour. If you do decide to try it, I strongly suggest that you leave the rum in it; honestly, it’s really good! Oh, we decided to make it a little more decadent by drizzling the cake with salted caramel sauce. It didn’t need it, though. Both John and I agreed that, though it’s great as it is, this is a basic recipe that could easily be modified. What goes with apple? John suggested, believe it or not, lavender. I thought, perhaps, almond. It’s a recipe that invites experimentation. And I just happen to have a few more apples.

Then there were the lemons. Sure, I could have made another lemon meringue pie, or two. I know Trinity would have been thrilled. It just happens, however, that I bought a new bundt pan today (something I didn’t have until now) so I started looking at bundt cake recipes today. A number of the recipes I found start out with a boxed cake mix but if you know me at all, you will know that there are no boxed cake mixes in my house nor are there ever likely to be. I kept looking until I found this one. 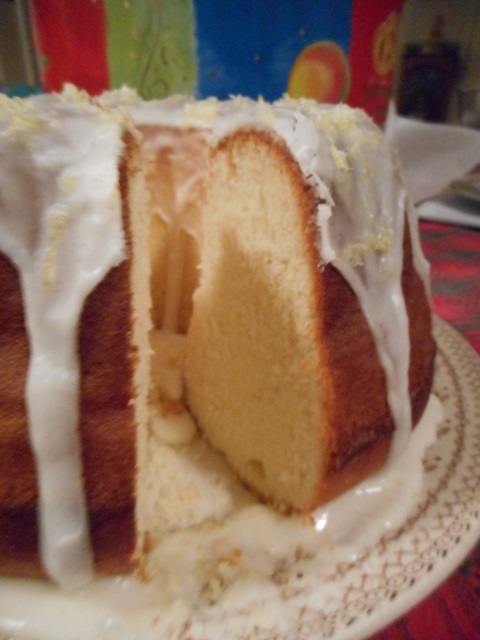 With lemon juice in the cake, lemon juice in the glaze, and a sprinkling of lemon sugar on top of it all, this is one lemony treat. The cake is a hot milk cake and is so moist and flavourful, John was pretty much moaning with pleasure. I made on very small alteration to the recipe; when the cake came out of the pan (cleanly, I might add), I brushed the entire cake with lemon juice, giving it even more lemony flavour. I think Trinity will like it.

Dinner was amazing. Sorry you weren’t here to enjoy it with us.